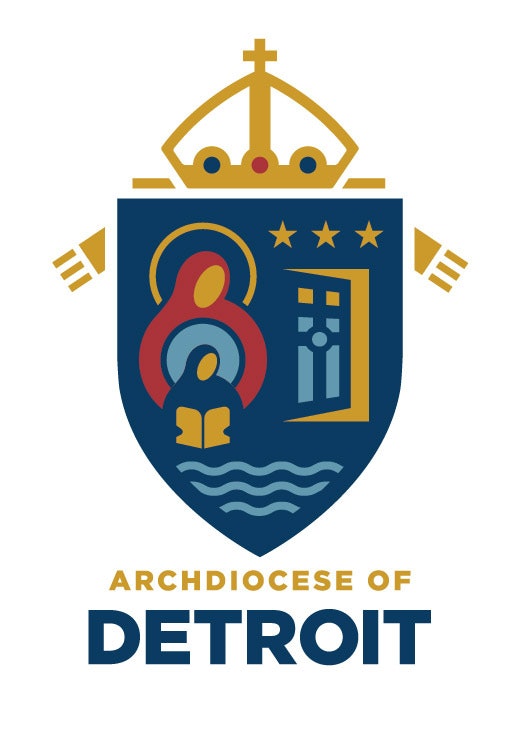 The Crest and Miter

The shield denotes the crest of Jesuit missionary priest and martyr St. Isaac Jogues. From the founding of our city in 1701, missionaries have been at work in Detroit. And today, God continues to call us to become missionaries of Christ — to Unleash the Gospel, the theme of the 2016 Archdiocesan Synod.

The crest is adorned with a miter, the headdress of a bishop and representing the jurisdiction of the Archdiocese of Detroit as a diocese established by the Pope and given to the care of our Archbishop.

The Cross and Stars

The three stars in the shield represent the three persons of the one God – Father, Son and Holy Spirit. “The mystery of the Most Holy Trinity is the central mystery of Christian faith and life. It is the mystery of God in himself. It is therefore the source of all the other mysteries of faith, the light that enlightens them” (Catechism of the Catholic Church, 234).

The miter atop the shield is marked with a cross representing Christ’s redemptive sacrifice.

Saint Anne embraces her daughter, the young Blessed Virgin Mary, who is being taught the Jewish faith and anticipation of the Messiah. This symbol affirms the importance of Sacred Scripture as well as the primary role parents play as their children’s faith educators. St. Anne is the patroness of the Archdiocese of Detroit, and the patron saint of grandparents, homemakers, unmarried women, infertility, sterility, expectant mothers, women in labor, cabinet-makers, miners, equestrians, against poverty and for the poor, among others.

She is integral to the history of the Catholic Church, in Detroit. Two days after Antoine de la Mothe Cadillac and his companions landed on the west side of the narrows of what is now the Detroit River, Holy Mass was celebrated in a makeshift chapel – it was the feast of Saint Anne, July 26, 1701. Saint Anne Parish – beginning with the first settlement and continuing to the present day – is the second-oldest continuously operating Catholic parish in the United States.

The symbol of an open door has several meanings. “I have left an open door before you, which no one can close” (Rev 3:8). “The Church which ‘goes forth’ is a Church whose doors are open” (Pope Francis, Evangelii Gaudium, 46). As we Unleash the Gospel in response to our 2016 Archdiocesan Synod and embark on this new journey as a band of joyful missionary disciples, an open door represents our mandate to go out to share and proclaim the Good News of Jesus Christ.

Affectionately known as “God’s Doorkeeper,” Blessed Father Solanus Casey (1870-1957), is Detroit’s most recognizable model of hospitality, welcoming those in need, which he did for many years as a porter at St. Bonaventure Monastery in Detroit. A simple Capuchin Franciscan priest, Father Solanus welcomed an estimated 650,000 people during his time as porter, each person encountering the presence of Christ through his hospitality, understanding, wise counsel and prayers.

The door in the crest is adorned with a cross. “Whoever wishes to come after me must deny himself, take up his cross, and follow me” (Mat 16:24). Our missionary journey is made by Way of the Cross.

The Archdiocese of Detroit spans six counties in Michigan, nestled among the Great Lakes. The lakes contain 20 percent of the world’s fresh water supply. Like the movement of the Detroit and St. Clair Rivers, the Gospel is powerful and ever-flowing, conquering obstructions in its path.

Importantly, our entrance into the Christian faith is through the cleansing water of baptism and the grace of the Holy Spirit. According to the Catechism of the Catholic Church, “Through Baptism we are freed from sin and reborn as sons of God; we become members of Christ, are incorporated into the Church and made sharers in her mission” (1213).